And yes it is!! (in case your lost with the picture, Veronique is my first name)

Frenchie le Boyfriend and I received a letter a few days ago saying we won 3 bottles of wine! And we had to pick them up today at a special “award picking up cocktail hour”. Thank you to the big man up above!

Frenchie le boyfriend and I had entered a drawing at a wine and food festival we went to a couple weeks back in the Burgundy village of Marsannay called Journees Gourmandes (pronounced “jore-nay — gore-mahned“). That translates to “The day for all the folks who like to get their GRUB AND DRINK ON!!” You can’t have an event like that where I come from (San Antonio, Texas) because otherwise the entire Mexican population of the city and their extended families and friends will show up and you will be left with nothing (’cause you best be sure they are taking home the centerpieces too!) By the way, it’s okay if I make fun of Mexicans because I am one =) Anyways, this blog post is not about the Mexicans, its about the dang 3 bottles of wine we just won! …… oh, and about the festival we attended where we won said bottles.

So going to a Food & Drink Lover Festival has its obstacles….first you gotta squeeze through this path….. 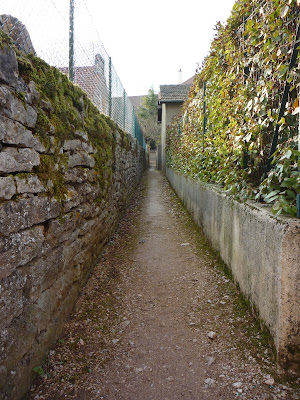 At first I didn’t know why they made the path so gosh dang narrow, but then when I left with a seriously awesome buzz, I realized its purpose was to aid in my walking abilities! hahahaha! 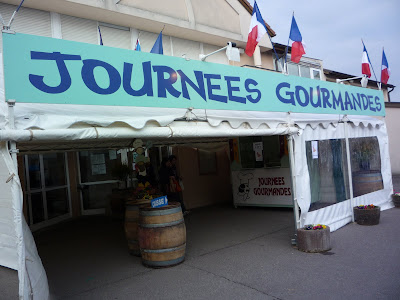 The welcome sign….Is he speaking or smoking something? 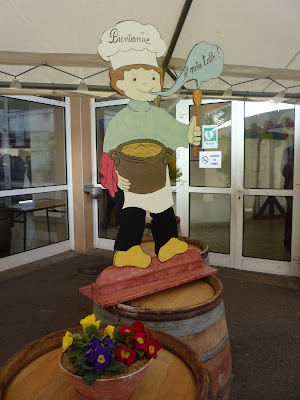 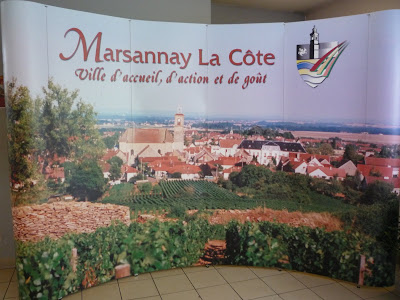 The village that was hosting the festival is called Marsannay La Cote. The slogan underneath reads: “City of welcoming, action and taste!” HehHehHeh…..city of action…..teeheehee. WARNING: NERD TIME The city has roughly 5,000 citizens and is about a 10 min drive south of Dijon. It is the northern most wine producing village of the Cotes de Nuits. The Cotes de Nuits is one of Burgundy’s wine producing sub-regions. The others are Côte d’Auxerre (Chablis), Cotes de Beaune, Cote Chalonnaise, Maconnaise, and depending on who you talk to, Beaujolais. Marsannay produces all 3 colors of wine; red, white, pink. Marsannay is the only village-level appellation which may produce rosé wines, and thus can be labeled as “Marsannay Rosé”, all other Burgundy rosés are restricted to the regional appellation Bourgogne and thus cannot say where they come from and can only be labeled as “Burgundy Rosé”. The Marsannay AOC is a recent one, created in 1987 and there are no Grand or Premier Cru vineyards there. [insert snobby British accent and motion of smoking a pipe] The terroir is just simply not up to par darling, hmmmm. All jokes aside though, Marsannay produces some pretty great wines and is good quality for the price. 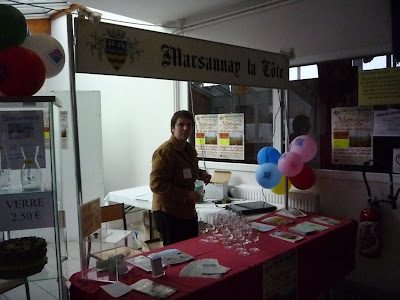 And off to do some food and wine tasting…. 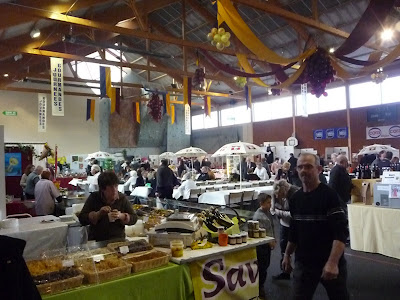 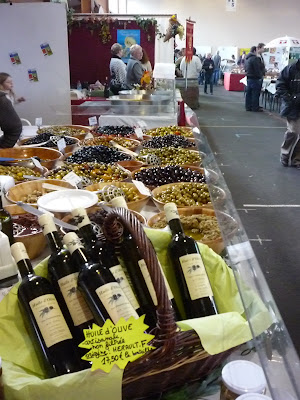 One of the wine stands had these two bottles….do you know what is the story behind these particular labels? If not, read on. 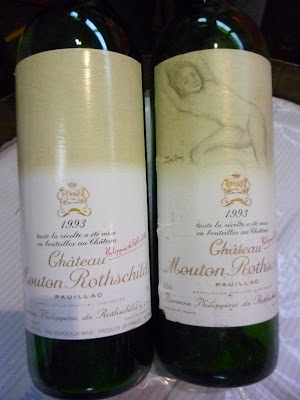 WARNING: NERD TIME Okay now bear with me, this may be a bit wine-nerdy for some of you. So once upon a time, Napoleon III, not the famous Napoleon, another one. (France has like 500 Napoleons.) So anyway Napoleon LXIIV wanted to make a ranking of the best wines in Bordeaux. The wines could be ranked from first to fifth growth, the first growth being the best. This classification was called the Bordeaux Wine Official Classification of 1855. (If you want to read more about this classification system, click on the link.) In the top ranking, or the first growth category, there were originally only four Chateaux. (Ch. Lafite Rothschild, Ch. Latour, Ch. Margaux, Ch. Haut-Brion.) But……in 1973….a certain Chateau caused quite the stir by getting itself bumped up from second to first-growth, and that would the Chateau Mouton-Rothschild. So why does this matter…..well, in 1946 Baron Philippe de Rothschild, El Jefe (‘the boss’) at the time of the Chateau, came up with the idea of having each year’s label designed by a famous artist of the day. See the list of artists here. And in 1993, the artist Balthus was commissioned to design the label. He drew a pencil drawing of a nude reclining young girl. This label was rejected for use in the US. So, for the U.S. market, the label was made with a blank space where the image should have been. You can imagine this actually made both versions quite sought after by collectors. And I had the opportunity to see them at this fair. 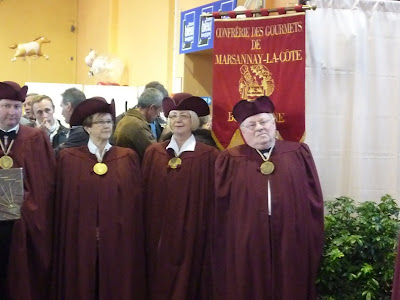 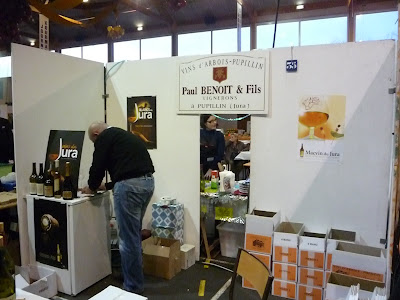 One of the booths was a wine producer from Jura. Mmmmmm FANTASTIC wines!! We bought 2 bottles from them. One red and one sparkling. I know I shouldn’t say this being in Burgundy, but MAN, the sparkling Cremant from Jura can rival those found here Burgundy. Mmmm! (Just in case, Cremant is a type of sparkling wine, made in the same method as champagne, but not coming from the region Champagne so it is called Cremant. These Cremant’s can be a wonderful option if you do not want to fork out the money for certified Champagne! Just look/ask for a french Cremant next time you need some bubbly. 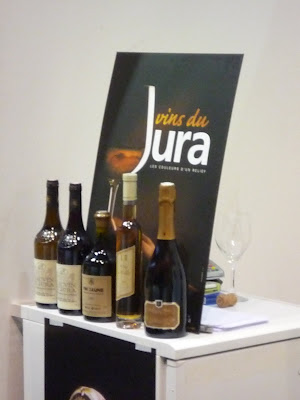 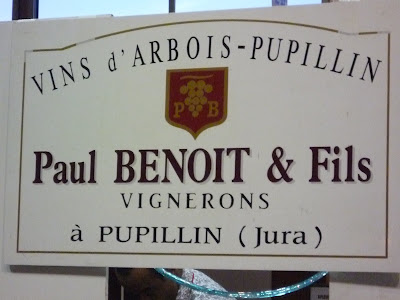 Okay, so that was the photo journey of the “Journees Gourmandes”

Here is a photo of all the drawing winners. Some received wine, some received fine dining gift certificates, one person even won an afternoon to go truffle hunting with pigs!!! I REALLY wanted that one!! 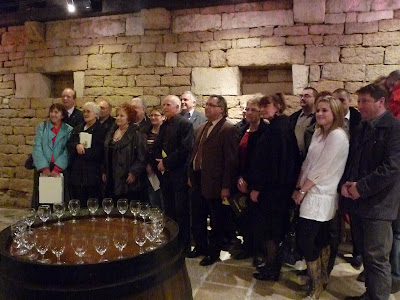 Here are our 3 bottles! 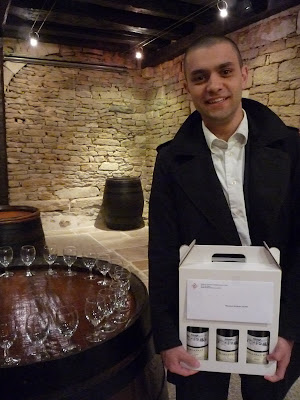 We also received a free tasting at the Chateau Marsannay and a free bottle when we visit! So technically we have 4 free bottles! 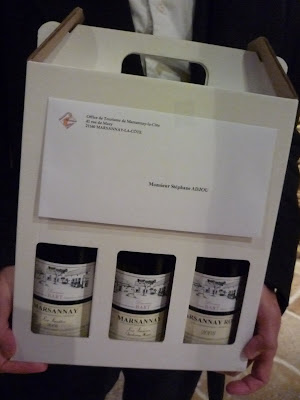 And in the french way, they offered us a cocktail hour with Gougeres (cheesy bread puffs), Parsleyed Ham, and some Marsannay rosé wine mixed with blueberry liquor called “La Murée” 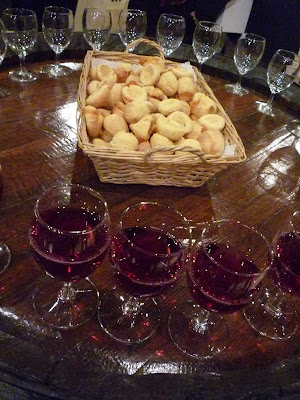 Up close and personal with a Gourmet Brother! (minus his robe and hat from the photo above) I am already a Sigma Lamda Gamma sorority member, can I be in the french wine/food brotherhood too?! (Future goal of mine!!) 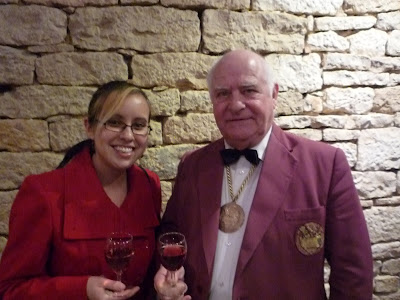 Yay for winning 3, well 4 bottles of wine!!! I hope you enjoyed the virtual voyage, hope you laughed or smiled, learned a thing or two about the world of wine, and hope to see you again here on the VS.