PARIS, April 7 (Reuters) – Spain overtook France as the world’s second largest exporter of wine in terms of volume behind Italy last year, the International Organisation of Vine and Wine (OIV) said in provisional figures published on Tuesday. Spanish wine exports were expected to have reached 16.5 million hectolitres (435.9 million U.S. gallons) in 2008, a world market share of 19 percent, compared with 15 percent for France at 13.6 million hectolitres, the body said. “France has suffered from a series of unlucky harvests,” OIV Director General Federico Castellucci said. “Last year, was the worst harvest since 1991.” France had been in second position after Italy in 2007 with 15.2 million hectolitres, compared with 15.1 million for Spain. France remains the world’s largest exporter of wine in terms of value and its biggest consumer, but it has sharply reduced its wine production in the last two years and widely allowed “vine grubbing,” or pulling up vines and replacing them with other crops, to counter falling prices. Global wine production is at “relatively low levels” after the surface area covered with vines decreased by some 28,000 hectares in 2008 to 7.86 million. In Europe, the amount of vineyards shrank by a record 33,000 hectares to 3.82 million. The European Union now has less than half of the world’s vineyards, compared with 60 to 65 percent only 20 years ago, Castellucci said.

U.S OVERTAKES ITALY – Global wine consumption, affected by the economic crisis, is expected to have fallen 0.8 percent last year due to a further decrease in European countries that are traditionally large producers and consumers — France, Italy, Spain and Germany — the OIV said. “It is obvious that the world economic crisis has played a role in lowering overall demand,” especially during the last quarter of 2008, said Castellucci. But figures show consumption has increased in “new consumer countries,” particularly in the United States. “For the first time, the U.S. domestic market surpasses the size of the domestic market in Italy,” the OIV said. Some 27.3 million hectolitres of wine were sold in the United States in 2008, compared with 26 million in Italy and 31.8 million in France, according to OIV forecasts. In recent years, wine consumption has increased in Northern Europe, Australia and the Americas, Castellucci added. Only British consumers, particularly affected by the economic crisis and the decline in the British pound, reversed the trend of the last 15 years and bought 1.5 percent less wine in 2008 than in 2007. (1 hectoliter=26.417 U.S. gallons)
(Reporting by Michel Rose, editing James Regan, Leslie Gevirtz)
© Thomson Reuters 2009. All rights reserved.

IN VINO VERITAS (and a little bit of Olé!!)
Cheers! Salud! Sante! May your glass always be full of wine!

Ceci to the Americans & Veronique to the French 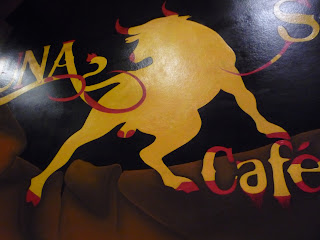