having all of that WHILE being at a sporting event!! And not just any sporting event!! A San Antonio Spurs Basketball Game!!! LOVE ME SOME SPURS!!! They are definitely my favorite team in the NBA, but then again I am biased because I am a 22 year resident of San Antonio. I’ve been rooting for the Spurs since I was in Pre-Kinder! (long before they were the monstrosity of a team they are today!) And just put me in front of a sports game and I get all into it, screaming, yelling, squeeling, cheering, covering my eyes, biting my nails, the whole bit. but c’mon, give me a break … I just get a little caught up in all the excitement. And don’t put me in front of a football game, this little Texas wine drinker loves her some good ole American Football!

Anyways, back to my Spurs!! I was outrageously lucky enough to be invited by my dear friend, Melissa Unsell who is outrageously lucky enough to be privy to 2 box seats on the restaurant level of the AT&T Sports Center. Let me tell you, drinking beer and eating nachos has its place, but this was first class all the way!! I think I may have found my new favorite way to watch a game at a sports center. Give me some good food, good wine, good company and some SAN ANTONIO SPURS and I am one happy woman!! I also love the Spurs because their head coach, Gregg Popovich, is a HUGE WINE lover. Gregg, if you some how read this, maybe you are a big fan of my blog, who knows…..We should, NO WE NEED to drink wine together sometime when I am back in San Antonio working on my Master in Wine Biz Thesis. Maybe you would be up for me interviewing for my thesis? If anyone who is reading this knows Gregg, would you do me a big favor and send him the link to this entry =) Ok, back to the game….

Here is some video footage I took of our surroundings:

A shot of the AT&T Center 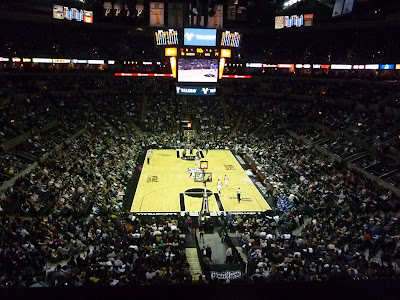 TONY PARKER!!! OMG, and in case you didn’t know, Frenchie, my frenchman …. he bears an insane resemblance to Tony Parker, or as Frenchie says, Tony Parker looks like him. 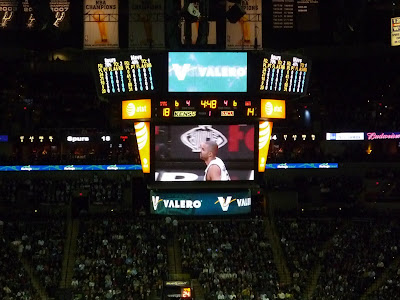 Ms. Melissa and I 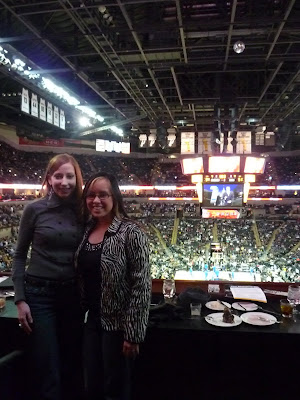 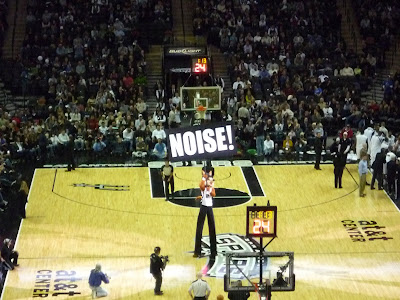 Shot some video of the game, the Spurs were playing their longtime rivals, the Dallas Mavericks, who won by the way and that really put a big pimple on the rest of my evening, but whatever, we all know that the Dallas Mavs smell =) One year my dad’s side of the family, from Dallas drove the 5 hours to San Antonio, just to sneak into our house and put Dallas Maverick decorations everywhere! My dad was soooo pissed, hahaha! But don’t worry, my dad taught me never to get mad.
.
.
.
Just get even ;) Love you all my Dallas family =)

And time for the essentials…..WINE!! Melissa and I decided to have a white wine for the first half and a red wine for the second half. The wine list wasn’t half bad, but I like all sporting event pricing, the mark ups are ‘slightly’ higher than normal. 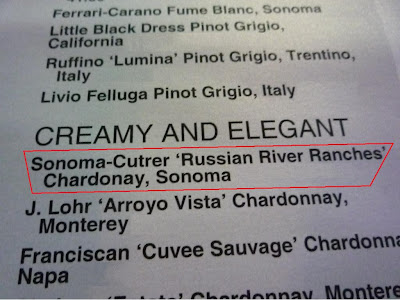 As you can see we went with the Sonoma-Cutrer “Russian River Ranches” Chardonnay from Sonoma, I remember it having a mix of citrus and tropical fruit flavors, a slight spice, round. And it went well with the food. 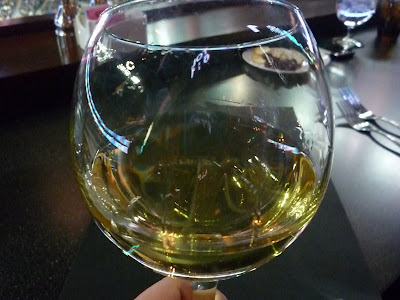 Some shots of the buffet! Mmmmm! 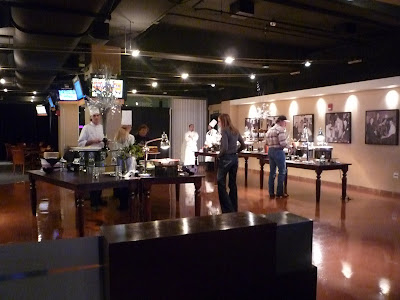 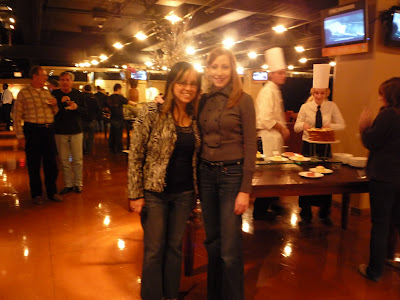 Time to get my GRUB on!! I wanted to tie myself a bib with the cloth napkin, but Melissa vetoed that idea real quick! She said it would be a distraction to the Spurs while they were shooting free-throws. What can I say, I’m a messy eater =) Hence the nickname Messy Ceci….. 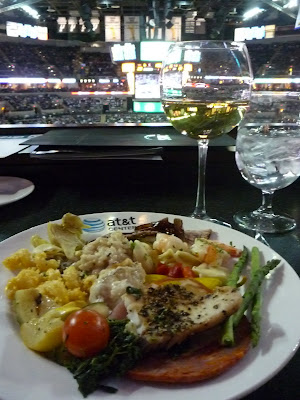 I think I embarrassed Melissa a bit because I just could not contain myself, I knew I had food to eat, but I was WAY too into the game. And I forgot not to speak (or yell at the top of your lungs) with food in your mouth. The waitress offered to put up a ‘splash guard’ as there were people on the level underneath us, but I politely turned her down. I think the people sitting below us were from Dallas anyhow, you could smell ’em from a mile away and they looked funny. =P Much love, much love. I’m just bitter cause D-Mavs won =( 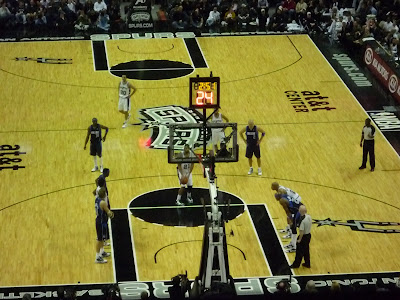 YAY! MAKE SOME NOISE…..HALF TIME! I may or may not have been DYING for the second half to happen so we could have the red wine! I should be put in a zoo with a sign saying “DO NOT FEED THIS ANIMAL WINE” 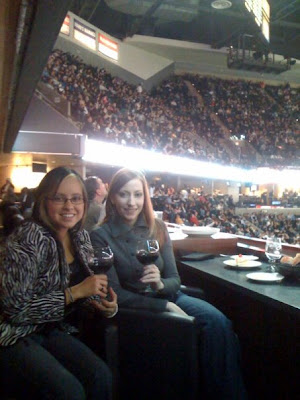 We chose the Estancia Meritage, from Paso Robles. If you’re not familiar with what Meritage means – [INSERT NERDY TIME] it is the wine term applied to domestic (US), Bordeaux-style blends. A Mertiage must contain a blend of at least two of the following grape varietals: Cabernet Sauvignon, Merlot, Cabernet Franc, Petit Verdot, Carmenere, Gros Verdot, Malbec and St. Macaire. A typical blend will have either Cabernet Sauvignon or Merlot as the primary grape and the other grapes will make up from 15% to 50% of the rest (three or four varieties in a blend is most common). For a white Meritage the grapes are Sauvignon Blanc, Muscadet and Semillon. In a Meritage no more than 90 percent of any single variety may go into the blend. Other specifications include: the Meritage must be the winery’s best wine of its type, it must be produced and bottled by a U.S. Winery from grapes that carry a U.S. appellation and its is limited to a maximum 25,000 cases per year.There are other “Bordeaux Blend” wines that are not labeled ‘Meritage’ however, this is because a winery must join the Meritage Association (i.e. pay $$) in order to use the term ‘Meritage’ on the label. [END NERD TIME] 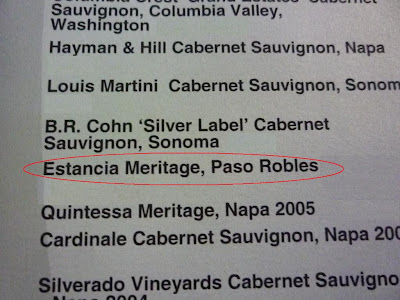 The wine was yummo, big red fruits, kinda jam-ish, some spice, very nice tannins, they weren’t too overbearing and some cocoa type flavors too! Man how I missed these Bordeaux/Bordeaux Blends. Studying in Burgundy has WICKED advantages wine-wise, but it is rather impossible to find a Bordeaux and vice versa due to the Burgundy/Bordeaux Rivalry…..eh eh, get it……Spurs/Dallas rivalry……Burgundy/Bordeaux…..coincidence….I think not! 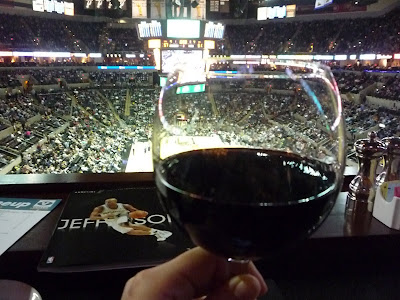 So I am lucky enough to have one of the coolest priests on the face of this planet as my amigo/ami/friend. No, really…..take everything a ‘typical’ priest is like…..and THROW IT OUT THE WINDOW! If I could compare this to a song….it would be like what FunTwo’s Canon Rock is to the classical version of Pachelbel’s Canon in D! Anywho, he is also a BIG Spurs fan! A lot BIGGER than I am, ’cause he was 10 rows from the court….mild jealousy issues occurring. But being the silly gal that I am, I had to find him from my seat. Can you see him? 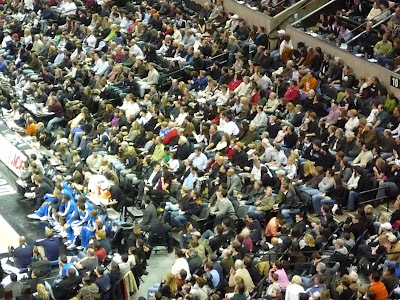 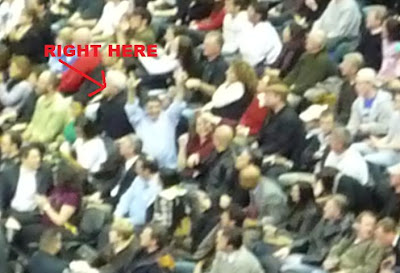 That was a lot of fun, we were being big dorks and waving at each other the entire time! hahaha.

On a side note, how much do you love the “Women’s Restroom” sign? 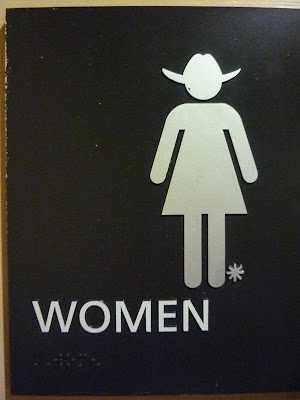 Naturally Melissa and I, being the big oenophiles that we are, decided to finish up the night at Wine29, a wine bar in San Antonio that offers some pretty sweet wine flights. Here was the flight I did: 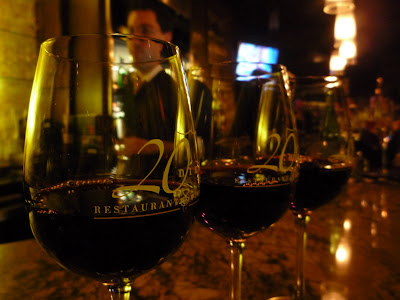 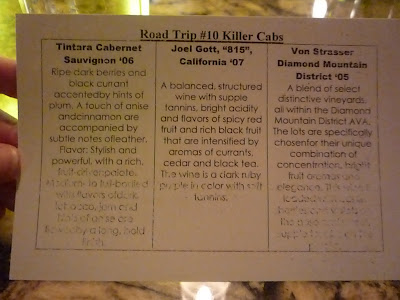 THANK YOU MELISSA FOR A WINEDERFUL EVENING!!!! I look forward to many, many more when I get back to San Antonio. (I promise to not use the napkin bib any more!) 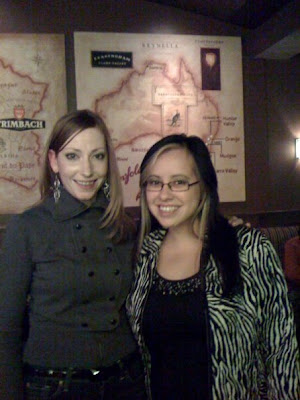 Speaking of Sporting Events and Wine….check out this article that talks about the marathon in Bordeaux where you “run” the marathon but stop at the different stations along the way to drink amazing wine and food. ME WANT TO GO!!!! Marathon du Medoc in Bordeaux