When the world seems to shine like you’ve had too much wine….

That’s amore!!
.
and boy did we have toooooo much wine!! Well, maybe not “toooooo” much, with six o’s, maybe more tooo, with three o’s, but in any case the theme was Italian wine/food night, and YES we are still RECAPing the wine from my holiday visit state-side. And I know you are thinking, “Damn Ceci Sipper, this recap is taking forever. Hurry it up already!” but I have a good reason….WE DRANK A SHLOAD OF WINE!! (for those of you who fell off the wagon, shload is the PC way to combine a four letter word beginning with S-H and the word LOAD, keep up with us) Use it. Love it. Incorporate it next time you are talking to your boss or overbearing co-workers. I wouldn’t recommend saying it to your teachers. I got in trouble one time for that. I had to beat the white board erasers for a couple hours….(if you really believed that, you need a glass of wine -even if you didn’t believe me, go get yourself a glass anyways, you’re def gonna need it to appreciate the following video on this entry)

So where were we. Oh yes. San Antonio, Texas. Chez…my parent’s house. It was Italian wine/food night. I was the chef….hence the awesome photo of me in my chef gear. 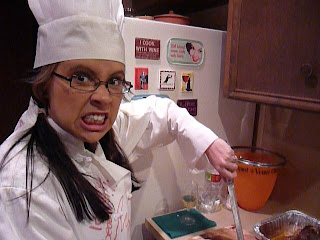 and the other members of a group I founded called BYOW (Bring Your Own Wine) were in charge of bringing the wine. Let me back up a sec. BYOW was founded on Tuesday, July 10, 2007. It had just been a year since I graduated from Occidental College and I was having “lack-of-intense-social-life” issues. I knew people, but none of them ran in the same circles. So I decided to try an “experiment” to see if I could join them together under the same roof and see if they could all get along. I was also growing tired of repeating the same stories 12 different times. (If there is a more efficient way, I will find it) So I told them to meet me at a pizza parlor called Volare’s in San Antonio. And since they had no liquor license, I told each person to bring a bottle of wine. And why Tuesday you ask? Because I had nothing to do on Wednesday. SO long story short, we met EVERY Tuesday for a year until I moved here to France to master up, every week the theme changed; sometimes it was French, Argentina, who can find a wine with the highest alcohol content, wines that have a red label, wines from a certain grape, year, etc. The BYOW-ers still meet every so often and we have all remained good friends ever since. We always reinstate the BYOW night when I am back in the states =) And when I move back in July….they better get their livers ready….cause BYOW is back on!!

So back to Italian BYOW night. Here is a video I made showing the wine and food we had. Done in true Ceci Sipper style.

I know in the video I said I would interview the BYOW-ers….well that is what happens when you drink tooo, with three o’s, much wine. I kinda “forgot” slash got side-tracked with drinking wine, so you don’t get to meet them, via video, until a later date.

But I did manage to snap some up close photos of the wine before the said intoxication occurred.

The group favorite was this wine: 2007 Masi Masianco Pinot Grigio 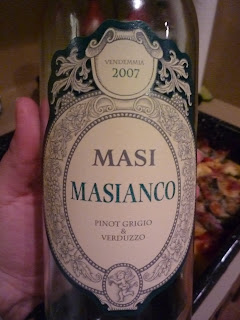 It was quite awhile ago, but I remember it having a great fresh taste, the acidity was just right for an aperitif/before dinner type wine. Everyone seemed to find this wine quite enjoyable. I am more of a red wine gal, but this is a white I would recommend. 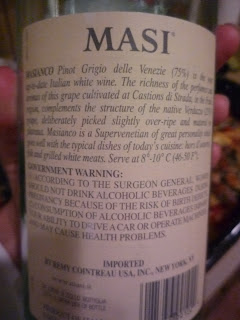 Unfortunately I don’t really remember this next one too much. I don’t remember anything bad or off-putting about it, but nothing that stuck to my memory like the Masi did. Guess I have to revisit it =) It is mostly Sangiovese grapes with a bit of Merlot. 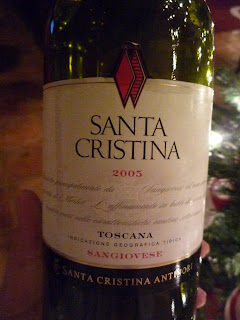 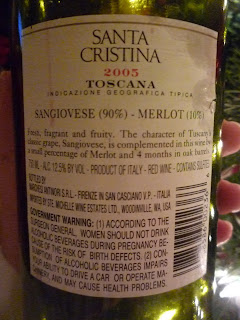 I did like this wine, 2006 Le Volte Toscana. I felt it was a smooth-drinking wine. I remember the roundness of this wine. It completely coated your palate like a big warm hug. (perhaps the culprit on why I over-drank hahaha). It is a mix of Sangiovese, Cabernet Sauvignon and Merlot grapes from Tuscany. I would definitely recommend this for a week-night wine with a nice Italian dish. 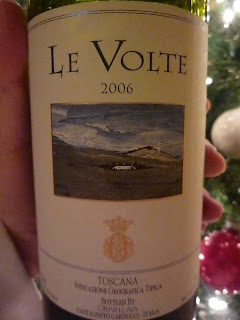 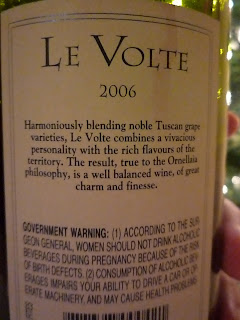 This 2007 Cecchi Chianti went excellent with our Italian Herb Marinated Pork Loin Roast. Mmmmm. It is mostly Sangiovese grapes with a bit of Canaiolo and Colorin grapes. It was easy on the palate and didn’t try to steal away the spotlight from the food, but rather supported it like a nice Chianti should. 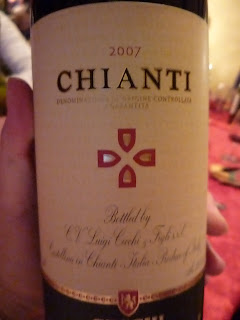 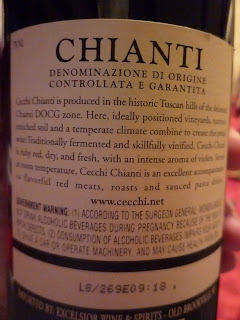 Wish I had more fun footage to share with you, but as I said, the wine got the best of me and all the buttons on my camera were blurred together =)

We, in the wine blogger world, show each other lots of support so, if you find that you have a higher interest in Italian wines/culture and would like an outlet for which to explore that…I recommend this wine blog: DO BIANCHI ~ the author, Jeremy P. just got back from his honeymoon in Italy, so if you start to follow now, you can get a recap of the OFF THE CHARTS Italian wines he tasted while there. He is one of the big-dogs in the wine blogging world, so you will learn a lot from him. Also he is one of those “I Wasn’t Born in Texas, But Got Here As Quick As I Could” Texans living in the grand city of Austin. So let’s show a fellow Texan some love!

4 thoughts on “When the world seems to shine like you’ve had too much wine….”