Vinous Ladies & Gents, a once in a blue moon experience happened for me yesterday!! I had the extreme honor of having my very first vertical wine tasting. Now for those of you scratching your head right now thinking, “don’t you always taste wine vertically? Cause horizontal implies you’ve had one glass too many, no?”

Well, for my readers less versed in vinous matters, a vertical wine tasting, is a tasting of different vintages (i.e. years) of the same wine type and same winery. This emphasizes differences between various vintages. And just F.Y.I. a horizontal tasting is when wines are tasted from the same vintage but from different wineries. (Usually the wine type and region are kept the same to highlight the differences in winery styles). For more information here is a website with lengthier definitions and variations of these wine tasting styles.

So yesterday we had vintages from 1999-2009………and who was the lucky popper of my ‘Vertical Wine Tasting’ cherry you ask =P?

None other than……Domaine Henri & Gilles Buisson.

The grandson, Franck Buisson is the one who conducted the vertical tasting. He graduated in 2005 from the same school that I am getting my Masters in Wine Business at, except he attended the french program, Mastère Spécialisé in International Wine and Spirits Trade. Their domaine is located in the wine producing village of Saint Romain here in Burgundy. They grow all their own grapes used in the production of their wine.

Warning: WINE NERD TIME to follow!!
Their vineyards span a total area of 16 hectares (39.5 acres). The white grapes (95% Chardonnay and 5% Aligoté cover 7 hectares (17.3 acres) and the red varietals (95% Pinot Noir and 5% Gamay) cover 9 hectares (22.2 acres). They produce about 60,000 bottles a year of 15 different types of wines. And they have AOC Grand Cru, Premier Cru, Village & Regional certified wines. (If that last sentence sounds like a foreign language to you, check out this easy to read sight that will explain it to you)
Yaaay! You made it through WINE NERD TIME !!! (although there is more to come, but you can do it!!)

Ok, so back to the vertical tasting, the wine we tasted was the St. Romain “Sous La Velle” made from hand-picked 100% Chardonnay (why? because that is pretty much the only white grape you can use in Burgundy, with the small exception of Aligote). The single vineyard the Chardonnay grapes come from is called “Sous La Velle” hence, the name on the bottle. So here we go, 10 years of the same wine, lets see what the differences were. 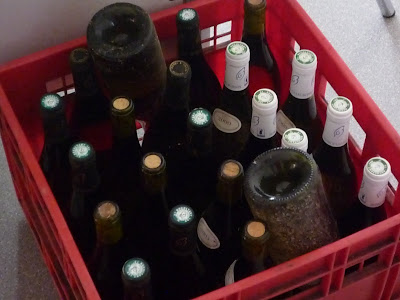 Franck Buisson, the son of Gilles and the grandson of Henri Buisson. Very cool guy!! 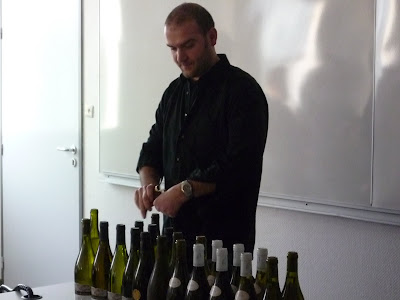 First up the 2009: citrus, white flowers, mineral, slight effervescence, a little heat on the back end. Like a 6am wake up call where your parents rip the blankets off you in one swipe cause you aren’t waking up. But it is still a wine that is not completely ready to drink, unless you lean masochistic =P 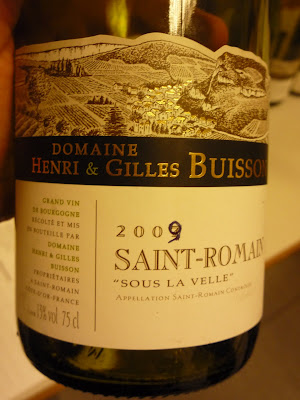 The 2008, smelled a bit of oak, hints of green things, still mineral, citrus, acidic, but not as rowdy as the one before. This is a bit more tame, like the 2nd sister =P 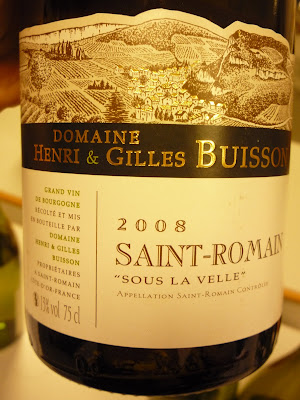 2007: lighter in citrus, some stone action, a bit of grass, a bit of an animal to it (I’m thinking white pony, maybe a brown one, hard to tell =P), and the acidity is loosening up. Now I know you are asking why on earth would the smell of animal be a good thing….but unless you’re Texan, seriously country, or have a thing for animals, you just wouldn’t understand. 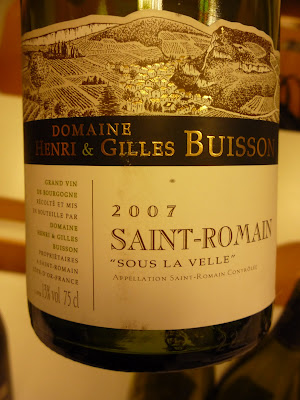 2006: This one was like Elton John, a bit on the fruity side! It had some apple, banana, lemon, acacia, honey, still some minerality. This was one of the best years in the line up. See…it is like Elton John! Fruity, but epic! 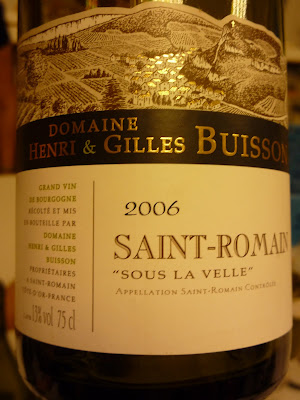 2005: kinda stoney, chalkey, less fruit smell. This one was stronger on the nose than on the mouth with a nice finish. (Oh the possibilities of that innuendo. snicker, snicker) 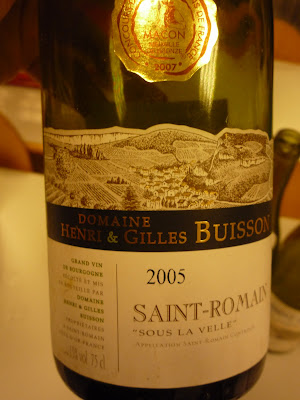 2004: Now this was the dang step-child of the bunch. This one was an experiment of the domaine. Only about 300 bottles made and not for sale. This one is as au naturel as your gonna get. They added nada, zip, zilch, to this wine. Just grow, press, sit and bottle. Just to see what it turned out to be. Franck said it is interesting, the variety between each bottle of the original 300. Some are not okay to drink, some are amazing. He wanted to bring it just to show us the natural character of this particular wine. It is amazing that it held up after 5ish years without anything added. Drinking this was like riding a horse bareback!! 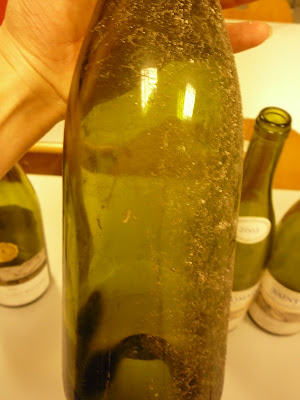 2003: This was the year of extreme hotness in France, much like what was said about me the year I showed up in France =P. I got some cilantro, lemon/lime, herbal action. Can someone get me a Carne Asada taco?? Aside from the 04 this one pushed away from the ones before. 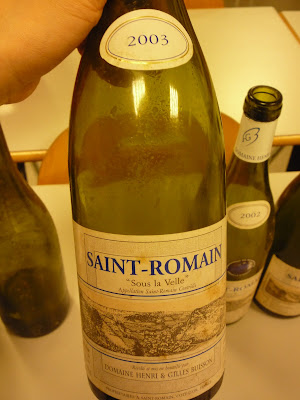 2002: Holy Tahiti!! This one smelled of exotic fruits, pineapple, litchi. But, sadly the mouth on this wine was Zzzzzzzzzz Tired and gone. This poor wine has passed its time, on to the wine retirement home for this one! Yay for endless Bingo and children’s choir concerts though! 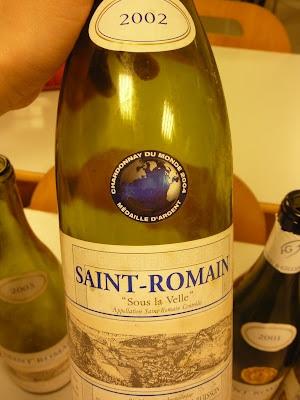 2001: Now this one was just the opposite from the 2002. Tired on the nose but very much alive on the palate. Like the old man at the nursing home who teaches stationary aerobics =P It had a nice balance with nice acidity, a bit musty on the nose with a hint of reduction. 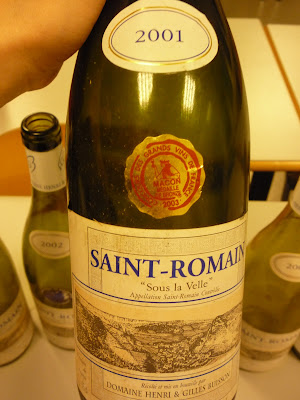 2000: This one had a smokey aroma to it, sort of animal again, but still maintained a nice acidity on the mouth and was still very pleasant to drink. 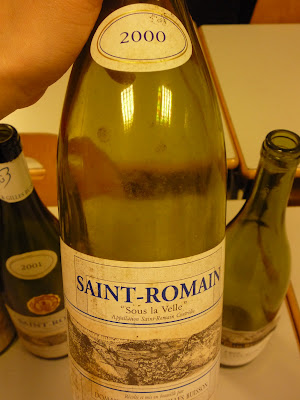 1999: WOW!! Never underestimate an oldey! Had a great nose of dried fruits like banana, apple, some nut aroma, sounds like my kinda Trail Mix!! And the flavor on the palate….WOOHOO!! Can I take this on my next hike instead of real Trail Mix?? 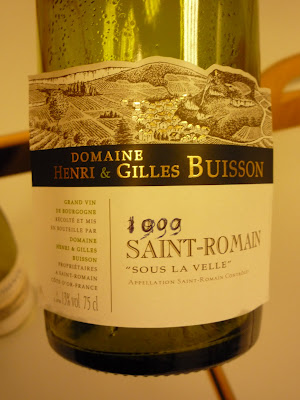 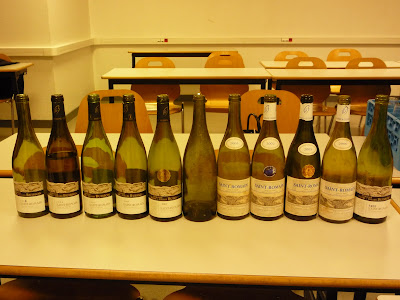 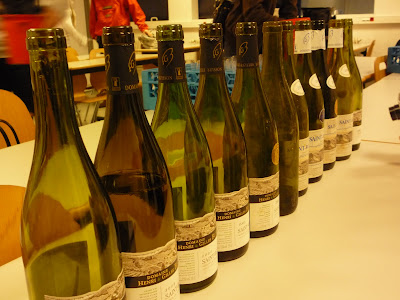 I hope you enjoyed the vertical ride!!!

I am off to finish packing for my ProWein Wine Trade Convention in Dusseldorf, Germany! I leave tomorrow!!! Ahhh!! Wish me luck!! And P.S. I am super excited because I got a press pass as a wine blogger so I will be blogging live from the Press Center at PROWEIN!!! Stay tuned!!!!

And if you will be at ProWein you can visit the above:
Domaine Henri & Gilles Buisson
Monday March 22nd Only! Hall 5 Stand B08
and Friend them on Facebook!
and their wine is available in the US!

SEE YOU HERE, AT VINOUSLY SPEAKING, NEXT TIME….LIVE FROM PROWEIN!!!!