Ok if you understood me so far, that is about 90% of the vocab you will need to travel to the south of France!! Well, that is if you are a fan of wine…otherwise, I can’t help ya out! You’re on your own =)

Ok! So to get us in the right mood….I uploaded a video I took while on my mini-vacation to the South of France this summer. It is from a balcony of a house-turned-restaurant in a coastal village called Le Dramont.


Now time for the cliche, but oh so necessary, bottle of rose! Now for you “non pink” drinkers, you despise-rs of the white zin, you who blush away from the blush….rose from France is quite opposite from ‘the sweet pink’ you find over-shelved in the US grocery stores. Most of les roses from France are dry, half of the rose wine made in France comes from Provence and 80% of the wine made in Provence is rose. So before you decide to skip reading this post, think again! Many a devoted wine fan can be seduced by these roses! Especially you foodies! Roses like this are a great pairing to seafood, spicy foods, Asian foods, salads and Mediterranean fare! (not to mention it pairs well with a load of friend types) So go find yourself a bottle of french rose and drink along with me on this blog entry to the bottom of the bottles of Provencal roses that I drank on my Mediterranean vacation.

What made this region popular to begin with? The nearby major seaport city, Marseilles, was founded in 600BC by the Greek folk, which later fell under the rule of the roman empire, and with them they brought their amazing wines and vines which led to them being planted in this region and they thrived! The grapes used in the roses are Syrah, Grenache, Mourvedre & Cinsault.

First off, I polished off a Rose from the region in Provence called Bandol. They tend to use more Mourvedre in their roses thus providing these roses with more body then their counterparts. Bandol’s are considered to be one of the top quality roses. They are rather complex for roses, which makes them so sought out! 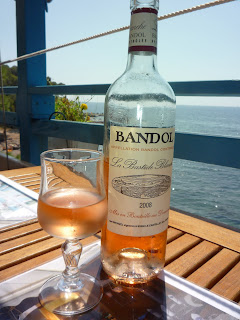 It truly was a treat to drink this Bandol rose! Here’s a link to an LA Times article on this bottle! 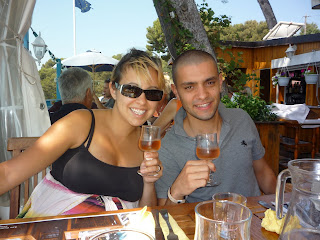 I paired this bottle with my sexy french boyfriend and a grilled Sea Bass (the name in french is Loup) This was palatal paradise~!! 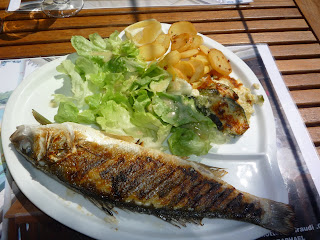 Next bottle from my vacation was ‘Othello‘ a 2008 Vin de Pays du Var from Domaine Grande Bastide. Vin de Pays du Var is one of the ‘vin de pays‘ departments in France, ‘cept this one covers….duh….’the Var’ in southern France, which is within the larger Vins de Pays Provence.

Now bear with me, I am going to get a little nerdy here to explain the phrase ‘vin de pays‘…so in France you can have four levels in the wine classifications: Gold Medal goes to the AOC – Appellation d’origine contrôlée (translated ‘controlled term of origin’ wines), Silver goes to VDQS – Vin Délimité de Qualité Supérieure (translated ‘Delimited Wine of Superior Quality), Bronze is for the Vin de Pays (translated ‘country wines’), and Honorable Mention is the Vin de Table (translated ‘table wine’)

Technically you would say this is like a Bronze level french wine, but as with anything, never underestimate the little guy.

Back to this wine: it is a combination of Syrah & Grenache grapes. 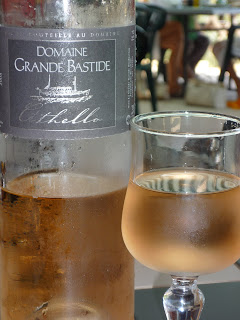 It was nice for lunch because it was sooo hot, and this wine was light, fresh, and wasn’t too overpowering to make you want to wait and drink it late afternoon. I shared it with my frenchman. He had the restaurant’s Signature Salad. 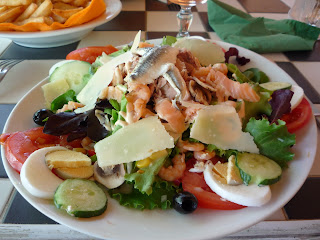 I had their Asian Salad. The wine went perfect with both. 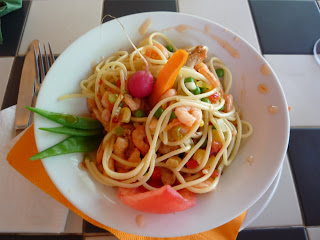 For dinner that night we ate at this fabulous Thai restaurant in downtown Saint Raphael, over looking the major boulevard and sea! We had a 2007 Cotes de Provence from the Chateau de Roquefeuille. It was in between the previous two, as far as lightness. I remember it having a nice fruity smell, but just an essence of it. 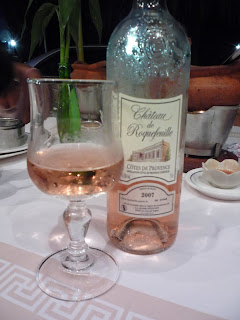 We shared an order of spring rolls to start, 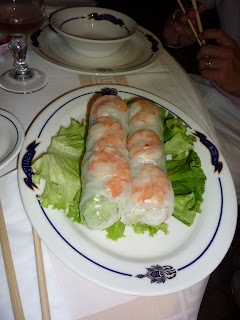 and a spicy lemongrass and seafood soup to top it off!! 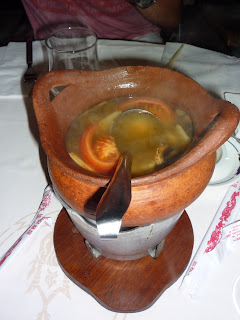 I couldn’t think of a better wine to pair with the food and the night heat!

One of the highlights of the trip was a restaurant called the “Black Fish Bone” that had its own private beach for its guest! You were literally ON the beach!! So amazing! 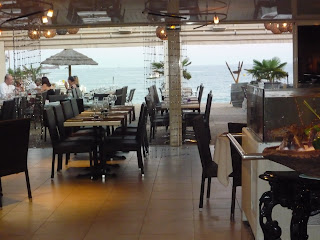 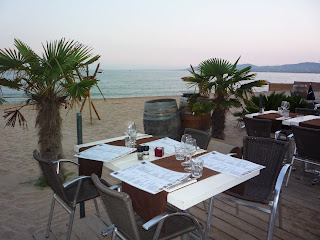 We ordered a 2008 Cotes de Provence from the Chateau Roubine. I like the pretty purple label. It was rather light in flavor, but I think I subconsciously knew I was going to need it for my powerhouse dinner I ordered! You see, I choose my wine first, then I choose my food. Don’t try to sell me on the other way around. Wine is the foundation of my meal. And this is not just at restaurants. I do this when I menu plan my weekly meals before going to the grocery store! 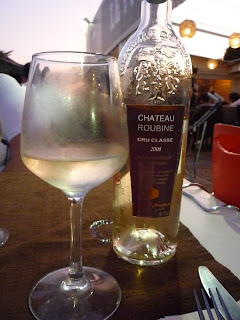 For starters, Frenchie and his parents ordered some fried fish. Being from Texas, I was thinking, “Yummy I love Fish Fry’s!” Hahaha, no catfish here….it was a bowl of teeny little bait fish…I mean…where was the meat? I tried one…and only one…luckily I had the rose to wash down the fried mini fish skin stuck in my teeth…..I will try a food once…but for this food, once was enough. I mean, you know its bad when you use wine as a chaser for food! hahahaha. 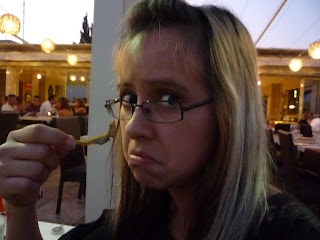 For the main dish though…….I was in heaven! I ordered one of the best green curry dishes I have ever had!! It was a seafood curry and I was completely silent through the entire dinner. My mouth could only focus on consuming more and more of this yummyness. The wine served more as a thirst quencher than anything else. I mean after all wine is 86% water! 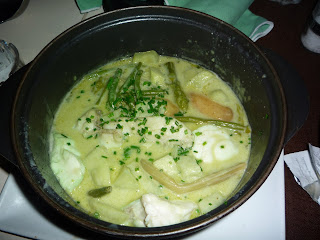 Well my newly converted, devoted, or curious rose fans! That is all the rose we have for today! I hope you will think about running out soon and snagging a bottle or two of a nice dry french roses before it gets to be too cool for it!! I know here in Dijon, France it is starting to be cool enough to need a light jacket at night. (being from the inferno of San Antonio, TX you can imagine how scared I am to have cold coming in at the beginning of September!!)

I cannot wait to catch up with you on the next post! We will be coming back to Burgundy for that one! Cheers! et a bientot! (translated ‘see ya soon’)