London Bridge Is Falling Down …

Well, actually it is not, but if it were, the first thing I would do is save my glass of wine =P

Scratch that, I would save the bottle!

Alright folks, with London Bridge still fully in tact and childhood songs aside,

LET US COMMENCE WITH THE LONDON INTERNATIONAL WINE FAIR RUNDOWN!!! 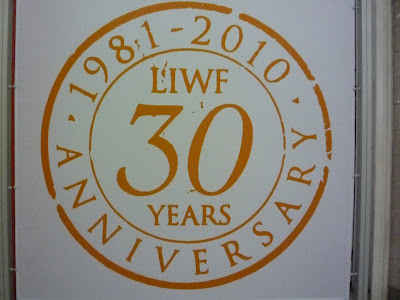 Now for those of you who are freaking out right about now and thinking, “Nah, that’s too much wine industry mumbo jumbo for me.” Stop Yourself Right THERE!

Vinously Speaking is about bringing its readers into the world of wine …. Moonbounce style! 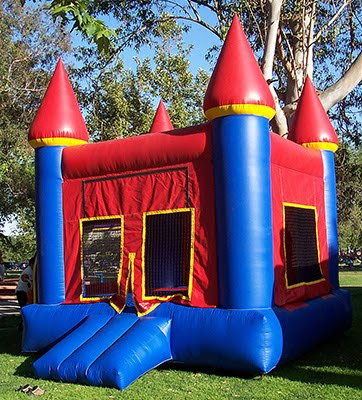 How much fun are those!! (Note to self – Have a ‘Moonbounce & Wine’ party)

Ok … Moonbounces aside, Vinously Speaking is here to do three things:

So don’t worry about your level of wine knowledge or whether or not you understand wine industry/marketing/business lingo …. I will break it down for you and give the DL on the 411 and what is off the hizzy fo’ shizzy in the world of wine-izzle! (For my readers who didn’t quite catch that … I was just channeling my inner rap artist =P) And besides, even if you are not a ‘regular wine drinker’ or only know that wine comes from grapes, it is still good to expand your
vinous minds and at least know a little bit about what is happening behind the scenes in the world of wine …. because it’s all about you! Each time you buy a wine, we are talking about the time you spend, the choices you make, the brands you are buying, the amount of money you are spending, the things about wine that are most attractive to you … all this and much more is what we ‘the wine business brigade’ are focused on. So while you may think you are just drinking your glass of wine on the other side of that computer …. think again. We are watching every wine move you make!!! MUAH-HA-HA-HA-HA!! (ok that was a bit Big Brother, but you get the point) So, don’t switch webpages, I want you to hang on and bear with me. Learn a bit about what we are saying about you, the wine consumer!
~
~
~
~
Alright! Let’s get this train moving! All Aboard!!! Off to THE LONDON INTERNATIONAL WINE FAIR !!! 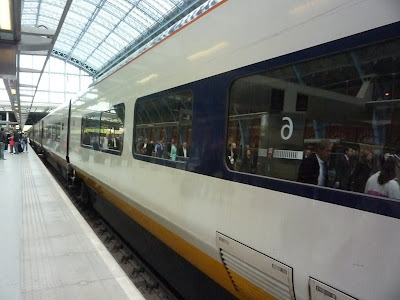 *For those who may not know, that is the EuroStar. Its the train you have to take from France to London …. via the tunnel under the English Channel! 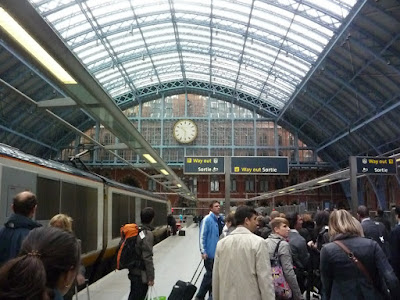 Once into the train station I was dying of hunger and did what any anglophone would do,
SEARCH FOR REAL BACON AND A REAL CUP OF COFFEE!!! 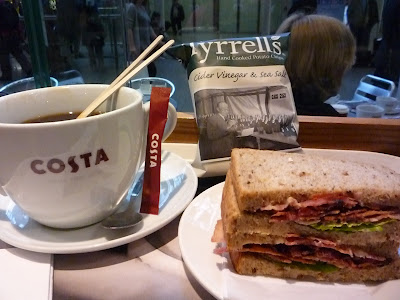 I mean, I love France, but bacon here is like Canadian bacon and this American needed the American version of bacon and as for the coffee…the French are Espresso-ists /anti-Cup O’ Joe (Not that it’s a bad thing, but the only strong liquid I repeatedly like in shot form is Tequila) With that being said, I found myself a triple bacon BLT and instead of water, I opted for a half gallon of coffee!!!!! I was one happy American!

After the quick lunch it was off to the hostel to check in. (Yes, the joys of a student budget.) Here is a photo of the lobby. I stayed at the London St. Pancras Hostel in Kings Cross. Not too shabby, but definitely can’t wait until all my studies pay off and I can come to the London International Wine Fair and stay in some swanky London hotel with a bellboy named Winston. 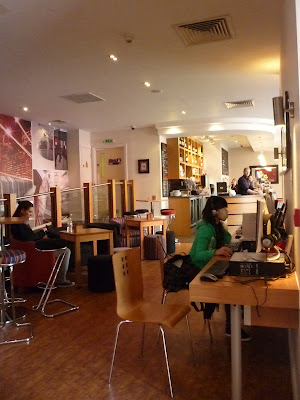 I had just enough time to check in and put my luggage in my room. I had to be at the Fair Grounds ASAP because I had been invited to attend a special pre-wine fair Conference held to mark the 30th anniversary of the London Wine Fair. Space was limited to 200 people, so I felt pretty lucky to be invited! The topic of the conference was ‘Winning Wine Export Sales – Understanding the UK Market and Making the Most of On-line Media’. I was asked to attend by my director to represent our Masters in Wine Business Program and also to ‘show-off’ my efforts here on Vinously Speaking Wine Blog. While the first part on the ‘Understanding the UK Market’ was very interesting and I learned a lot, it was the ‘Making the Most of Online Media’ that was obviously more of my forte! It was such an amazing feeling to be there to represent the Masters, and even more thrilling to be there representing and promoting Vinously Speaking. It was mind-boggling to see how far all my passionate blogging efforts have taken me in such a short time. 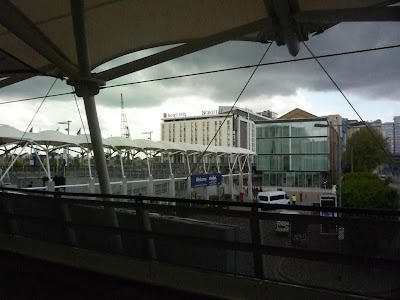 The ramp walking up to the Excel Center where the London International Wine Fair was held. 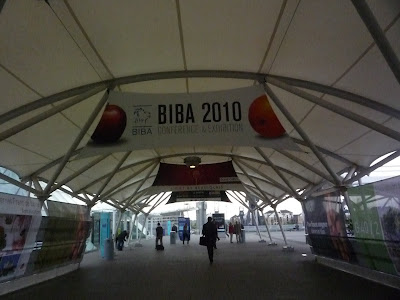 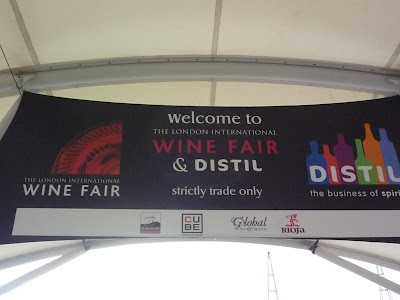 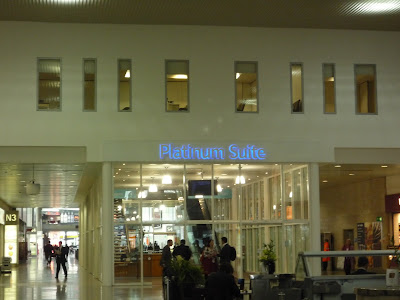 Here was where the pre-wine fair conference was held, the 2nd floor of the Platinum Suite!

The first presenter/MC of the event is a big name in the wine industry named Robert Joseph. Very influential and very intelligent. It was wonderful to hear him speak! Decanter Magazine has said, “Robert Joseph is one of the 50 people who will influence the way we drink wine in the 21st century.” 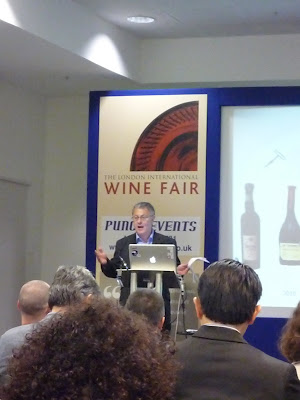 He has influenced me, that’s for sure …. I blame him for my wine drinking obsession =P

He opened the conference by comparing the change in wine to the change in music and women’s rights. He pointed out that in the last 150 years we have gone from only being able to hear music live to listening to music on our Ipods and cell phones; women have gone from being considered 2nd class citizens without a voice to being seen as equals and running countries and major international companies. But for wine… in the last 150 years … he said the change has been minimal and has been static and structurally/economically unsound. But he did say, the next 10 years is where the radical change for the world of wine will happen. And I believe he is right!

He also spoke about the decline in wine consumption in Europe, particularly France, mostly due to zero tolerance policies towards drinking and driving, new public awareness concerning healthy living, and the new generations viewing wine as a thing of their parents generation. He went on to talk about the over-production problem facing the wine world today and the increase/decline of European wine exports in various markets. Another thing he mentioned was that the US is the world’s largest market in terms of value and it is still the biggest EU export target market. So it’s not just oil we American’s are guzzling up, it’s quality European wine as well! Momma didn’t raise no fools!! haha. He concluded by saying there is still lots of growth to look forward to in the US market, certainly in China, to some extent Brazil and further in the future, India has some potential. 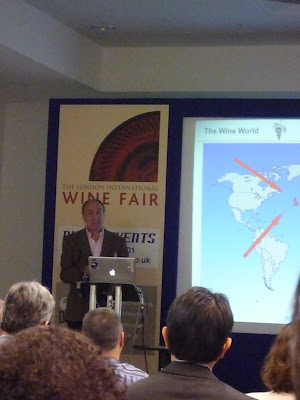 The next speaker was David Cox, the Director in Europe for the New Zealand Winegrowers. His topic was “The UK Market – Is it worth it?” – He started by saying that even though the last 20 years has seen growth in the % of regular wine drinkers in the UK (HECK YA!!), the consumers in the UK are turning into ‘promiscuous buyers’ (tee hee!) who are spoiled by the ‘discount mania’ going on in the UK wine market. Despite that, he thinks the UK is still ‘worth it’. He said the major trends are rosé wines, online sales and mail ordering. He went on to say that smaller convenient stores were also a hot market as they are looking to increase/improve the offerings of wine as many people use them as a quick wine buying stop on the way home from work or to a dinner party instead of making the trip and waiting in long lines at the supermarkets.

Here is a link to an article I found on The Drinks Business, which goes into further detail on David Cox’s talk. 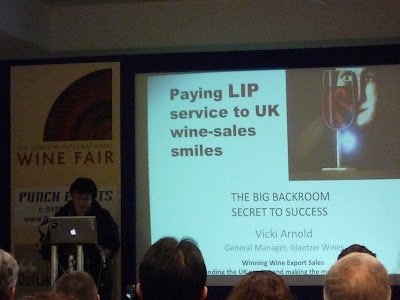 Next up was Vicki Arnold. She serves on the South Australian Wine Industry Council and is the General Manager at Glaezer Wines in the Barossa Valley, Australia. She spoke about the often over-looked, yet VERY important aspects of the wine business – logistics, information, and production!! This includes all the nitty-gritty, behind the scenes parts of the wine industry to include; regulations, freight forwarding, cost analysis, communications, legals, trading terms, exchange rates, insurance, fair trade, etc. …. WHEW!!!!!!! Now I for one don’t ever think about those things when I open a bottle of wine. I think of the vineyard, the winemaker, the barrels, the history….but never the dock that my Australian bottle was sitting on before it was sent to my retailer, or the customs sheets that had to be meticulously filled out, or the shipping containers, or the legal work behind all of this. …. But without all of that, this yummy Australian wine never would have made it all the way here to my wine glass, thousands of miles away. And these sorts of things never run smoothly, Vicki Arnold stressed that more focus needs to be placed on these aspects of the wine industry to bring more success for the wine industry as a whole. It’s a hard pill to swallow for many, and may not be the most glorious part of the world of wine, but it is so true and without these parts, we would all be stuck drinking local wine …. not that I am in any trouble though because Burgundy is my backyard for the time being =P

While I am sure these may not be the most exciting topics for you, my Vinous Readers, I still hope you are now aware of some of things that are being talked about in the wine business world. Perhaps you will think a bit more the next time you are buying a bottle of wine or perhaps you will remember some of what I said and use it next time in a conversation about wine … how cool will you look! Maybe even some of you might be influenced to come work in this wonderful land of wine business!

In any case, I don’t want to overwhelm you and I am sure you have a weekend to be getting to, so I am saving the second part of the Pre-Wine Fair Conference (my favorite!) for the next post!

If any of you are curious to hear more about any of the topics above or want more detail on what the speakers had to say, please do not hesitate to comment or email me! ([email protected])

4 thoughts on “London Bridge Is Falling Down …”