Not So ‘Happy’ Hour

Well I must say I am quite ‘Happy’. I am writing my blog entry and sipping on a glass of red Bordeaux from the acclaimed 2005 vintage! But one place that is not so ‘Happy’ is France.

In a recent legislatural move the french government has passed a new law forbidding bars from offering the well known “Happy Hour” as well as a few others bans aimed at drastically reducing the high rates of alcohol consumption in the 16-25 age range. The other additions are the forbidding of the “open bar” concept on campuses and in clubs, the sale of alcohol from 6pm to 8pm in gas stations (except wine), the sale of alcohol to minors under age 18 (before it was 16 to buy beer and wine) and allowing mayors to decide if they want to forbid alcohol store sales from 8pm to 8am.
In the U.S., the concept of “happy hour” was created to bring in business in the slow early evening hours and has been supported by many a businessmen who wanted a way to unwind after work and by the young college students who are on a tight budget. Being carded at a bar or restaurant is a serious matter in the U.S., but not so in France. Even though the law says that only 16+ may purchase beer and wine, no ID’s are ever asked for. Thus, it is very easy for the young french teens to take advantage of “happy hour” to get drunk quickly and cheaply.
It has been a long standing tradition here in France for young teenagers to have wine at home with their families for dinner and have a beer here and there at a family party. A good contribution to why the lure of sneaking out to go drinking is significantly less than as it is in the U.S. where the focus on the drinking age is more strict and at times taboo and why underage drinking, in the U.S., often begins as an act of rebellion or because of peer pressure and thus abused. But with the changing times, and young teens seeing the growing night life around them they find it hard to drink with moderation.
I am happy that the government has decided to take action to limit the availability of alcohol for those that are simply way too young to be getting drunk like that and so often, but I think they have taken the wrong actions. I was very shocked to hear that France was banning “happy hour”. I remember the days of college when it was a way to get friends together and share some drinks and appetizers without having to break the bank. I know what it is like to leave work and just want to stop off and have a glass of wine at a cheaper price, just to take the edge off a rough day. And well, as most you know I love any reason to celebrate, and why not celebrate a couple hours, which would normally be tiring and boring, some good friends, a good laugh, a good drink and at a good price!
I feel like the government really should just inforce the presentation of photo ID’s at all venues that offer alcohol. I don’t feel that at the age of 24, I should have something so simple yet enjoyable stripped away from me. I think a lot of adults feel the same way. France already has less of a ‘social’ climate than in the U.S. and the onset of “happy hour” was something that was making it better. It is rare to have a drink with coworkers here and to have the same social network as we americans do. The french are more ‘close circle only’ kinda folks. They don’t even have a word for acquaintance. All you americans know how many times have you have shared a drink with colleagues or invited ‘acquaintances’ to your cocktail party or had lunch with them after the kid’s soccer game? So in my opinion, “happy hour” was just the ticket to begin this onset of larger social networks for the french. One could begin to see colleagues sharing some “happy hour” drinks, some students chatting with the table next to them and just an overall great atmosphere as opposed to the “I’ll just go home and be anti-social” or “Let’s just be melancholy and drink a cup of espresso and not talk to anyone around us and only stare at the passerby’s”.
I also agree with the restaurant and bar owners here in France when they say that banning “happy hour” is going to really hurt their industry by decreasing profits. We all know that more of a profit is made of an alcohol sale (30%) than made of a food sale (10%) and “happy hour” is just a way to increase your revenue without having to work too hard or staying at work too late.
I whole heartedly agree with the french government upping the drinking age and recognizing the growing number of young drunken teens and wanting to do something to change it, but wouldn’t it be better for businesses and those over the legal drinking age, to be able to profit from “happy hour” and simply just make it necessary to present an ID to the bartender, server, etc. No ID, No Drink, No Problem.
Punishing the adults with the ‘no sale of alcohol between this time and this time’ and ‘no special prices and fun times at “happy hour’ is really chapping my rear end. Underage drinking is a problem in many places, but let’s start with the obvious ID method to keep the youngsters out of the temptation area instead of making me and many others adults a little less “happy”…
Long live happy hour! But don’t over do it =)
In vino veritas! (and ‘happiness’ too!)
Cheers!
– Ceci aka Veronique 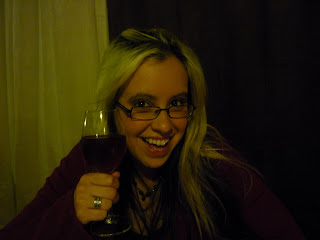