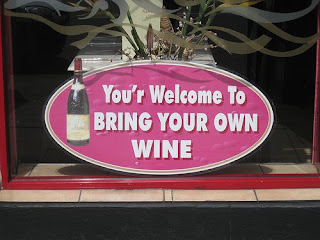 Now you see, these are folks who know what is important!

They may not be able to help you save money to pay your mortgage, but gosh darn it….they’re gonna let you have your wine and drink it too! (with no corkage fee!)
I found this article and was truly content! It really says something about your character/business ethics when, during a recession, you know what is truly important and you do something for the cause of keeping the spirit – of drinking wine, enjoying good food, and good company – alive!!!! NO RECESSION CAN KEEP THE WINE LOVERS DOWN!!! NO SIR!!! WINEAUX, WINEAUX, WINEAUX, WINE KNOWS!!!

Bringing your own bottle of wine to your favorite restaurant is getting cheaper and more popular.With sales and traffic dwindling, many restaurants are either offering BYOB nights or chopping the “corkage” fee to open bottles bought elsewhere, to entice more wine-drinking diners to pay for a meal out.”My fiance and I are wine freaks, so we have been going to more BYOBs as a way to continue to drink great wine while not blowing our budget,” said Christopher McGrath, a 26-year old money market trader and liability manager who lives in Montclair, N.J. — where BYOB restaurants thrive since state law restricts the number of liquor licenses available.The signs that bringing your own is on the rise are still largely anecdotal. Christina Preiss, a 27-year-old Chicago resident, said wait times at her favorite haunts that let customers bring their own are on the rise. More restaurants are also advertising special BYOB nights and more aggressively promoting the fee cuts.Bringing your own beverages isn’t allowed everywhere — the rules vary depending on where you live.But for eateries that can offer the option, it can be a way to boost traffic in tough economic times — especially for the fine-dining restaurants that have been hardest hit in recent months as even higher-income consumers cut back on pricey meals out.Chris Cannon, owner of Manhattan restaurant Alto, decided at the end of last year to suspend a $60 corkage fee through September — a move he said has brought in more customers.”Basically, we had to accept the fact that we were going through a recession,” Cannon said.Although some restaurants include information about their policies on their Web sites, most expect customers to call to find out whether they can bring their own. Some cities require a restaurant to have a liquor license while others do not. Even in areas where a liquor license is technically required, the rules are not always enforced.Bringing your own bottle may not have the cache of ordering off the list, where wines are sometimes paired with menu items to showcase the flavor of the food. But it can save you quite a bit of money. Restaurants frequently charge diners triple what they’ve paid for a wine. And David Henkes, vice president at Chicago-based food industry consulting firm Technomic Inc., said they typically charge as much for one glass as they paid for the entire bottle.Most diners bring vino as their drink of choice, but some diners do tote their favorite beer to the table at more casual BYOB-friendly restaurants.McGrath estimates he saves $50 at each meal from bringing his own wine.In Portland, Ore., Italian restaurant Serratto in March stopped charging its $15 corkage fee on non-peak days if customers bring in a receipt from either of two local wine shops. Wines at Serratto range from $22 to more than $100 per bottle, while a sauvignon blanc can be had for $7.50 at Cork, a nearby shop. Manhattan’s Tribeca Grill, where bottles of wine start at $30 but can top $1,000, has eliminated its $20 corkage fee on Mondays.Nick Valenti, chief executive of Patina Restaurant Group, waived the $5 corkage fees at all of his 15 California restaurants through 2009 except the flagship Patina in downtown LA.”Given the time, we thought it would be an appropriate thank you to guests who are interested,” Valenti said. “Our job at the moment is to accommodate whatever they want.”
So support your local BYOB restaurants (don’t forget to show them this article so they will do the same and maybe cut the corkage fee on a Monday/Tuesday night! If you don’t know of one….look em up on citysearch!
In Vino Veritas (and BYOB!!)
May your glass always be full of delicious wine!
Cheers! Salud! Sante!
-Ceci to the Americans & Veronique to the French