The New French Paradox: The Time for an American Uprising

Well my friends, the US of A may not have the best of images on the world wide front: a little bit of blaming for the economic crisis, a little bit of criticism on the War on Terror, and a question mark for our day of old ‘super power’ standing. But my friends, the time has come for us americans to come together and make a name for ourselves in the world once again. Im not talking about the breath of fresh air that Obama has brought with him to the White House, no no, I am talking about An American Uprising On The Wine Front!! There has been major discussion about the downward trend and vice-like look that the French are self inflicting on their wine industry. And on the other end of the Altlantic, Americans are drinking wine more than ever. Between 2000 and 2005 the percentage of the wine drinking population increased by 31% and for the first time in history wine sales out did beer/spirit sales! That my friends, is incredible. There is also a very popular trend in the US these days to learn about wine, not just drinking it.

The ‘new french paradox’ refers to the recent attention and actions the french government has inflicted on it’s wine culture and turning it into something, well , sinful. What is considered as a culture who has a perfect blend of food and wine apprectiation has seen a 40% drop in wine consumption of the last several years and a little under 50% of the population think drinking wine is too risky. Well associated with rolling hills of vineyards as far as the eye can see, wine tastings galore and dozens of francaises sipping their wine on bistro terraces, France has turned it’s back on the essense of it’s heritage and second to no other – wine. The french government has made such strict laws on it’s wine industry/consumption that is has been said to be ‘borderline prohibition-like’. Some of these ‘commandments’ are:

“Controls over wine advertisements which may not display people actually taking pleasure in the beverage. Finding magazines who promote the consumption of alcohol with their advertisements (That is like trying to advertise food without promoting eating……ridiculous). Rulings that state that articles about wine must carry a health warning, just as cigarette packages do. Regulation on wine web sites by restricting access. Trying to impliment laws that that would ban free wine tastings.” Asimov, Eric. “No Joie de Vins.” New York Times (March 4, 2009)


It has been the USof A who has been known to be on the extreme conservative side when it comes to the drinking culture. And I must agree with some of the commentaries on the above article which said, “You know its bad when France is acting more like the US, than the US!” “Whats next a ban on croissants because they are too caloric?”


Quelle horreur!! I have found my new destiny….to be the Moses for France! I shall the deliver the people from the abyss. I shall part the wine and lead the people to the promise vineyard!

Although, being the paradoxical people that they are, the french have also just created a Wine Tourism Council to promote wine travels to foreigners. Leave it to the french to create rules to keep their people from drinking but something else on the other end to make foreigners drink more! Yeah, so much for the real french paradox of eating fattening foods and not having heart issues cause of their wine consumption. French women will now get fat!! Muahahaha!!!

My fellow Americans, listen closely to me. (Well, just get closer to the computer screen, in any case) I want you to keep drinking that yummyness we call wine (with moderation of course) I want you to make a monthly goal of converting one new person to wine and one wine drinking session with your wine loving friends to …”maintain.” It is expected that we will be the largest wine consumer in the world by 2012. We’re americans here….we over deliver and in half the time….so let’s make is 2010!!

In Vino Veritas (and a good old fashioned american uprising) 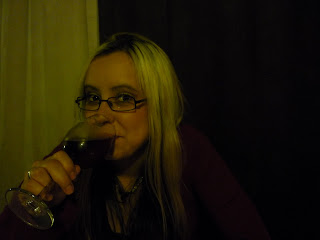 Some articles I read in preparing for my blog. If you care to read them.

US to Lead Wine Consumption in Near Future

The Curious History Of Wine Consumption In America