.
.
Fact: US President Barack Obama and his wife Michelle have a 1,000-bottle cellar in their Hyde Park, Chicago home, well more like a mansion, but who cares!!! The important part is … WE HAVE A WINE LOVER IN THE WHITE HOUSE!!!

What impact do you think this will have on US wine consumption? Do you think more Americans, heck, even people in other countries, will see his love and respect for wine and consider starting to drink wine or become more active wine drinkers? Do you think the wine laws and perception of wine drinking will “smooth” out with a wine-lover in office? Do you even care?

The Ceci Sipper wants to know! 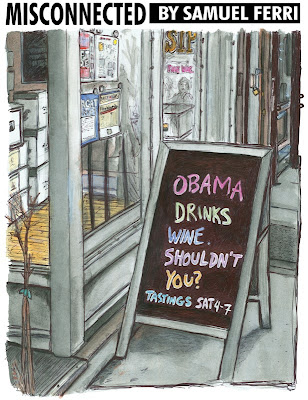 
So, how influential is the Presidential ‘Wineau’ so far? Let’s have a look…

Some presidential/White House wine trivia for you:
Hope you enjoyed my attempt at a “political” wine entry, haha. ‘Bout dang time we get a wine drinker in the White House!

Don’t be comment-shy & I hope you will tell your friends to join us here on Vinously Speaking!