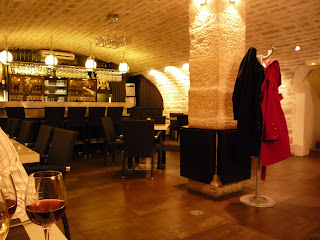 So I was dining at a wine bar here in Dijon when I noticed that our wine tasting session was abit different then most, the wine stewart was filling our wine glasses with wine from a tap !?!?!
*note the picture to the right, it is the machine in the background.
And this is considered a nationally recognized wine bar here in France ?!?! And I do believe he just served a 1998 wine from this wine tap ?!?!?! I was so curious. It seemed to be a very logical idea. You can serve wine by the glass, without having any waste. I think this is the start of something good!!! And it benefits both the consumer, the vendor and nature! So I looked up this cool phenomenon and VOILA….the following article showed up! I hope you enjoy with a lovely glass of vino!! I included the link at the bottom if you want to email/share it. You are also very welcome to pass on the site of my blog to anyone you think would be interested!

In Vino Veritas (and wine on Tap!!)

May your glass always be full of delicious wine!